Out of all the elements of this new game, the one that hooked the spawnlings was:

Despite all of their Evil Genius training to take over the world, they are still little spawnlings at heart. Awwwww…

Of course, they also loved the mythical monsters, the references to Greek Mythology, the fantastic artwork, and especially the competition to be the GREATEST OF ALL GODS!! But let’s be honest here: Any game that allows them to break what is usually a standard rule in the house is ALWAYS going to win esteem points in their minds.

Monstrous was sent to me to play and review by Good Games (Australia). The deal was simply to play it with EG Inc and tell Good Games what I thought. They are familiar with my blog and my ever endearing personality – so they know they are going to have an honest and upfront assessment of this game. As will you.

So What Is It?

IT is a ‘tabletop’ game with card-throwing as a key feature. As individuals, 2 to 5 gods can play; as teams, you can have up to 10 gods fighting over the table. The box says “ages 10 and up” but 7yo Nefarious handed me my glorified derriere so I think you can safely include younger spawnlings. Zaltu (2yo) was not invited to play – I’m already at risk of injuring myself. I don’t need to add her to the mix. 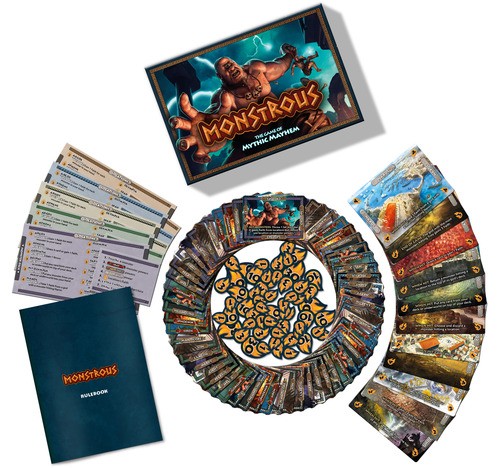 All the players are gods (it doesn’t matter which god you are – if someone asks if you are a god, you say YES!). And all the gods are a little miffed about dwindling faith on Earth, with offerings and sacrifices and what-not. So Zeus commands the gods to ‘thrown down some monstrous pets’ and scare a little faith out of the pesky mortals.

The real stars of this game are the monsters – and don’t they look beautiful! I have been a fan of Greek Mythology since I was 8, especially the artistic interpretation of the mythic creatures. Monstrous is true to form. 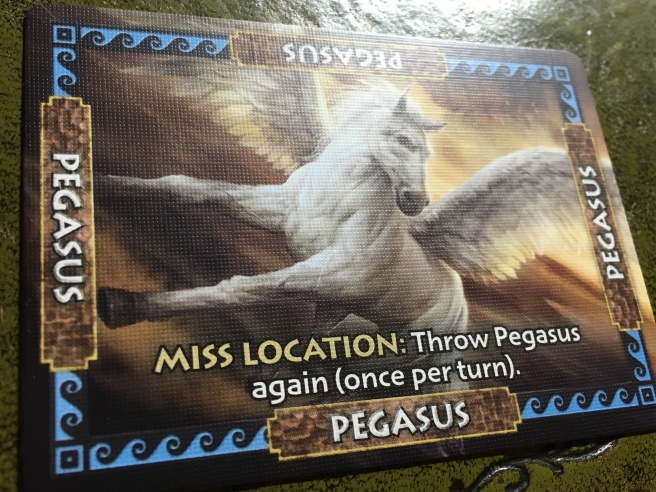 Each monster has a range of powers to use, and it totally depends on which side up your card lands. There are TRAP powers, MONSTER powers, and LOCATION powers. Some of these powers release a ‘Faith’ count to you. And the god with the most faith at the end of the game wins.

I’m just going to pre-empt all of this with a single statement: I am an un-coordinated git on the best of days. The spawnlings know this. It’s pretty fair to say I lost the game.

So, you set up the Locations. Each god has a Player Card, with instructions and guidelines (very handy). You have your Monster Deck, and your Underworld (discard pile). It is easier standing around the table when you have your turn to throw – if your hand crosses the edge of the table, your throw is discounted and your Monster is discarded to the Underworld. Position is everything; Distractions are hilarious.

Until you have your spawnlings (and husband) start setting up traps on your closest location.

To be honest, I was surprised at how much room there was for strategy in a game I thought was just ‘card throwing’. Each of the monster powers can be used in unique ways to give you the greatest impact on the table. If you’re a complete klutz like me, Pegasus will be your best friend – he has extra throws. Gorgons have always been, and will always be, absolute b*****s. Land on one of those and your card is GONE. And the Harpy – she steals your Faith, just like the lunch of King Phineus.

However, if you’re fellow gods pick up on your inability to throw a damn card, they are likely to start setting up traps on your more … ‘reachable’ locations. Once trapped, you lose your buddy Pegasus FOREVER!! L

Oh, yes! I have never played a game that required throwing things at the table. That’s not to say I haven’t thrown things across the table in frustration, but never as part of the game. This was novel and lots of fun.

There are lots of powers and interactions to keep track of during the game, but the rules and structure of the game are very simple to follow. The spawnlings loved it and have asked for it again next weekend. The best part is, you can change the game with locations and layouts, so maybe next time I will have a chance? Unlikely…

If there was anything I would change about the game, it would be the value of the Faith tokens. They come in 1, 3, 10, 30. I think I can see why they went with these combinations, but for the younger age groups, it adds a little extra work. If we had 1 and 2 value tokens, we would probably need more of them – though, the spawnlings would be faster in calculations.

For a throwing game, the cards are pretty good quality. Good durable card with a smooth glossy finish that won’t fade with wear anytime soon. Even when the Cyclops misjudged his step and went skidding across the table into a nearby wall, he walked away without even a scratch.

Monstrous is available through Good Games, for $39.95. Tell them I said hi. And thanks for the Pegasus.