A little while ago, I came across an awesome woman, Rebecca Millar from Geek Grrls. A humble mum in Australia, who is studying and working while being … well, an awesome mum. 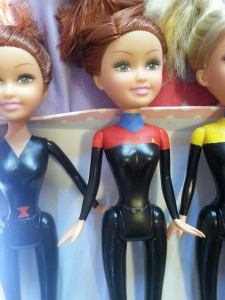 At first, I shared her Facebook Page, aimed purely at her ability to transform the most horrid of Bratz or Monster High dolls in to beautiful offerings to many SF/F goddesses.

BTW: This project started out from the frustration in the lack of female dolls in geeky merchandise. An ongoing issue that is gradually changing as seen in the new DC Superhero Girls series. Gradual change.

But did Rebecca stop there? Hell no.

Recently her daughter has been diagnosed with a ‘lazy eye’; treatment being a patch over one eye during day (to encourage the lazy one to get its act together).

As with most young spawnlings, Rebecca’s daughter wasn’t exactly thrilled on this idea. Not in the slightest.

So Rebecca appealed to her daughter’s geeky-interests. “You get to be Nick Fury!!”

And then her daughter said, Mum gets to be an Avenger too!!

How awesome is this?!? Cosplay to help medical treatment AND the love between parent and spawnling to share the cosplay!!

You, my dear lady, are an awesome parent. Evil Genius Parent – for finding a way to encourage the medical treatment, and encouraging your daughter to include you in her fun. Double points.