Last night, Evil Genius Dad and I caught up on Star Trek: Discovery with episode 8, “Si Vis Pacem, Para Bellum”. Now, I don’t understand the hate some people have for ST:DSC. I am really enjoying it. Both EG Dad and I feel it has the same spirit as previous Star Trek series, from the view of capturing the curiousity of exploration AND its ability to elicit discussion. Sure, it’s a little darker and honest—much in the same vein as Star Trek: Deep Space Nine, a VERY underrated Star Trek series.

Last night was another one of those conversation starters. The thing is, it’s never just one conversation. We end up talking a lot; sometimes afterwards, sometimes during. EG Dad and I really are the worst people to watch anything with. Good thing we have each other.

Episode 8 is split over a few stories, one of them focused on three characters visiting the planet Pahvo. Burnham, Tyler, and Saru find a sentient life-force of some shape, manner, or form, who seems to communicate with Saru. If you want a full re-cap, my colleague Jules over at GeekDad has a pretty good run down. I’m not summarising it here, nor am I giving spoilers. Instead, I have an example of how ST:DSC is keeping the magic of relevance that is so inherent in the Star Trek franchise. 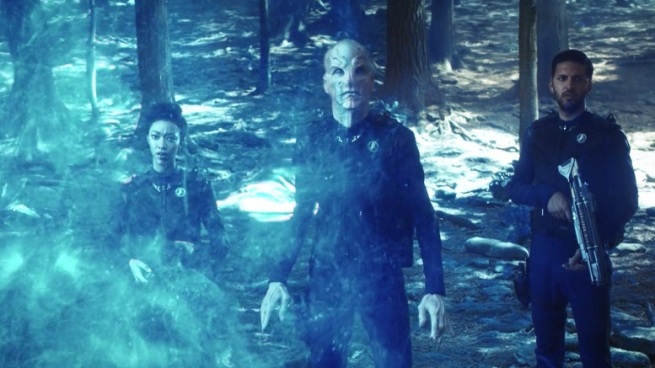 My focus is on Saru, a character of the species Kelpians. His species have been hunted for generations, becoming a product of their evolutionary growth as prey. As a species, they are constantly in a state of hypervigilance.

At first, there is a really easy way to compare Saru’s situation to our real world. There are thousands… no, millions of refugees in the same situation. There are children born in war-torn countries who have never known what it is like to NOT be in a war zone. There are third-generations now living in refugee camps, with children developing the same evolutionary patterns of hypervigilance as displayed with Saru (not with a heightened sense, but definitely with the same awareness and stress levels). What Saru is experiencing is not unknown in our world. But it is slowly being ignored. Partly because it is too easy for our Western ‘all-consuming’ society to see it once on the TV, sigh with an “oh, that’s awful” and then move on to the next media highlight. 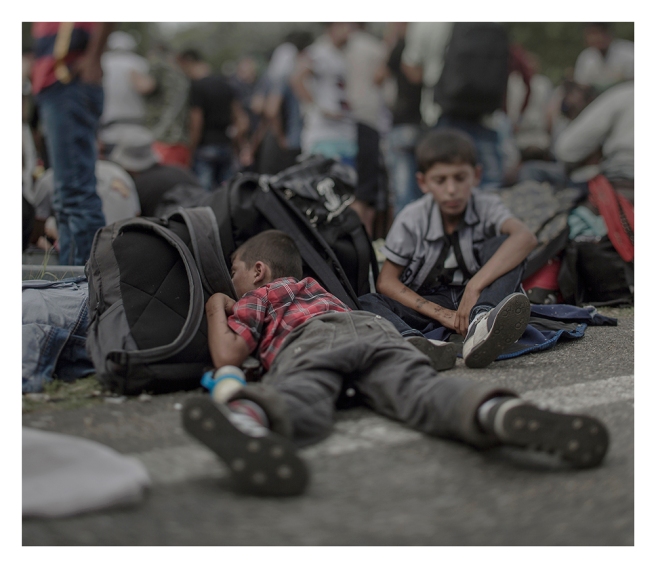 Taken from Magnus Wennman’s photo essay, “Where the children sleep”. This is Ahmad, 7yo. He is one of the too many children, sleeping on the streets at Hungary’s closed border. They were forced to flee their home, and now know even sleep is not a free zone. Follow the link to see more of the essay and learn how you can help. – http://darbarnensover.aftonbladet.se/chapter/english-version/

I get it. Sometimes the global problems can be a bit much for us to deal with it. We can feel overwhelmed with this horrible news and be uncomfortable with the feelings of inadequacy from not knowing what to do. I GET it. I feel the same way. Not everything is geeky in our Lair. We still want to take over the world because it seems like the only way to learn how to FIX this.

It made me think of a situation I had seen earlier the same day, in my very own street.

I was walking with Zaltu to pick up Sinister and Nefarious from school. In a short distance up the hill, I could see a couple walking towards us, holding hands. The only thought to cross my mind was, “I need to move over so we can all fit on the footpath.”

About a minute later, as we were about to cross paths, I noticed one of the couple abruptly let go and throw down the other’s hand. And this action filled me with sadness.

The couple were two men.

The look on one man’s face was a little fearful like he was nervous or afraid of what *I* might say or do because he was holding hands with a man.

There was nothing I could say or do, without making everyone feel even more uncomfortable. What I wanted to do was tap them on the shoulder and say, “If you want to hold hands, do it. I have no issue. It shouldn’t matter if I did. Love is love.”

It hit me when I was watching Saru, how this must feel in a relationship.

Imagine having your relationship, every relationship, born in fear. Imagine the beautiful, ‘new love’ high you feel with a fresh relationship…but it is tempered with the born-fear of not being able to share your love with the world. Imagine feeling that EVERY TIME you start a new relationship.

Imagine that hypervigilance with an everyday activity like starting a relationship.

This is why I love Star Trek.

Because the characters, the stories, the whole damn franchise, is presented in a way where anything is relatable. Everything is a conversation starter. There is always something that triggers my thinking on issues in my every day.

I especially want to see more ST:DSC to encourage me to look at my immediate world in a new way. I have a lot of respect for a show able to provoke my thoughts on how to make it a better place.