It seems ‘world creating’ has become a thing in the EG Lair.

It all started with Sinister building his own terrarium for a school project last term (which he scored 93%… Such a good little evil genius…) – 3 months later and it is still going strong, without any further interaction. Not bad for a 9yo.

This type of experiment started us thinking: “why not incorporate some other real-life elements in our plays?”

And thus the Dinosaur Project began. 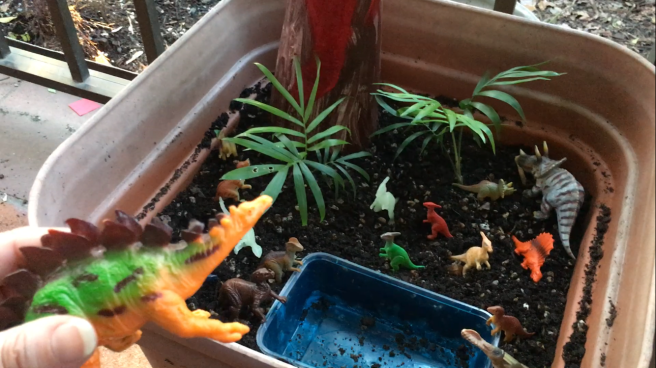 All of our elements were already around the home, but you can pick them up from your nearest shops for a fairly reasonable cost:

What did we do:

Zaltu is loving this little play area. She is really into the role-playing side, but I also noticed how quickly she picked up the carnivore / herbivore discussion we had earlier.

I would consider the Dinosaur Project a success. Now we are thinking of other ‘world creating’ play areas we can make!!