Let me clarify – my kids are still alive. Barely. But they are alive.

I would post a “Proof of Life” but I can’t seem to capture a photo that doesn’t include some incriminating evidence anyway.

So, when a suggested alternative to stringing them up outside my lair came across my desk… well, I was intrigued. 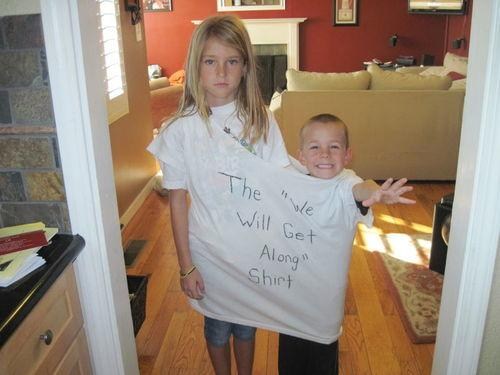 Don’t make me bring out The Shirt…

I love this shirt – it’s a win-win scenario for me. Either the kids shut-up and resolve their issue. Or they kill each other (within the confines of the shirt) and I still get on with my day.

Side-note: Take a look at the wall in the background. That colour would cover blood-spatter perfectly.

With this suggestion comes two recipients. Obviously the original poster of this picture, Cheezburger, receives the major kudos for this. And the original parent – if you’re out there and you ever read this: How many kids do you have remaining? And how many did you start with?

However, joint recipient of this award is Dallas F; a minion from way back who has earned this special mention. Not only did he bring this picture to my attention, but he was also too lazy to post it on my Evil Genius Mum Facebook wall – instead posting it on his own wall and ‘mentioning’ me to get my attention.

His excuse:  He only Facebooks on his mobile…when feeding his daughter.

Ugh. Parenting as an excuse. Genius.

Hmmm, I think Dallas may have taken last week’s recipient (Daddown Under) a little too close to home.

Now get back to work and make my cup of tea.