Senor da Vinci was a true Evil Genius. I really wanted to celebrate this day but I was stuck on ideas.

After reading a GeekMom article by My Little Poppies, I was so inspired by the idea of celebrating DEAR this week, I thought: why not celebrate DEAD – Drop Everything And Draw?

And what better way to celebrate DEAD than with a DEAD artist… like Leonardo da Vinci.

For those not familiar with DEAR, it means Drop Everything And Read. Author Beverley Cleary wrote about DEAR in her book Ramona Quimby, Age 8. It was such a hit, the USA hold national DEAR programs on April 12th, Beverly Cleary’s birthday. She is still alive too –  celebrated the big 1-0-0 this week.

At our local school (not US), the spawnlings practice both DEAR and DEAD in the classroom. I thought the timing was perfect for our Forensic Friday.

The thing about da Vinci is that he wasn’t just an artist. He was a polymath; an individual that was brilliant at everything (particularly during or influenced by the Renaissance). We’re talking painter, sculptor, engineer, astronomer, anatomist, biologist, chemist, geologist, physicist, architect, musician, philosopher, and humanist.

But I like a challenge. Today was in celebration of Leonardo da Vinci.

Now remember we ARE on school holidays at the moment, and the two older spawnlings have definitely earned a rest. So I opted for just one of his many interesting inventions, The Flying Machine. I took most of my cues from a book I picked up a year or so ago:  Inventions – Leonardo da Vinci, published in 2014 by Lake Press Pty Ltd.

This was a great opportunity to kick the spawnlings outside – let’s find some birds or wildlife and draw it! We live next to a park with PLENTY of birds that wake Zaltu up every damn morning.

Do you think we could find a bird today? 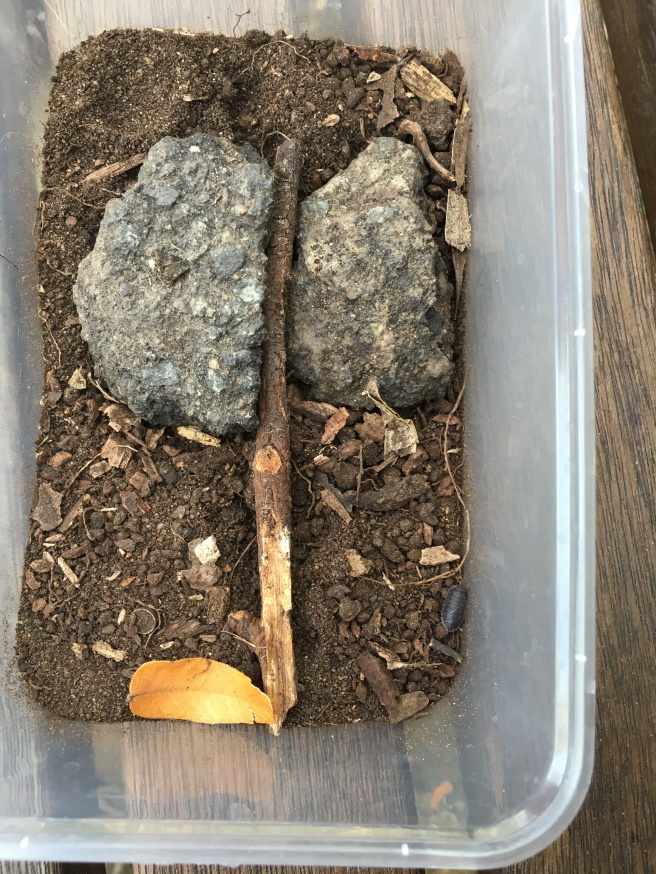 All we could find was this bug. I don’t even know WTH it is.

After our great exploration, we returned inside to observe and draw our wildlife.

Nefarious decided he wanted to paint the adventure, rather than the achievement: 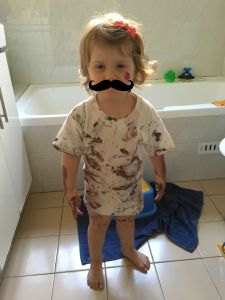 She chose to paint the participants in the adventure. Namely, herself. Literally.
As you can see, she was mighty impressed with me calling an end to the artistic display. Zaltu calls this piece “Rainbow Zaltu”. You can have it as a complete work of art for a mere block of chocolate… but don’t call me when the artwork wakes you at 3am asking why the possums are allowed to play outside her window and she is not.

Seriously though, Zaltu painted a beautiful wrapping paper design for da Vinci’s birthday presents. And was then upset when I had to explain there were no presents to wrap.

At which point, Sinister realised da Vinci gained his deep understanding of bird muscles from observing them inside and out (read: dissecting them) and was a little … concerned. During which time Nefarious read ahead in the book and learnt about the blowy-uppy weapons da Vinci designed and wondered why we weren’t building our own canons instead. Broken wrist remember?

We then had pizza for dinner and I sent them to bed – at 5.30pm. Because they tired me out.

For a bunch of activities to do for a day, it was actually kind of fun. The spawnlings were truly amazed by the concept of a polymath. The sheer amount of study da Vinci undertook to confidently do the work he did. Not so much Zaltu (she is only 2) but definitely the older two.

It was great watching them both realise you did NOT have to limit yourself to one speciality. You CAN be a marine biologist who incorporates art and software development in their work. You CAN be an astrophysicist who includes chemistry and electrical engineering in their project designs.

DEAD was just something to start the discussion. The best ‘birthday present’ today was listening to all three talk about what they wanted to create tomorrow.

I’ll let you know how Zaltu’s Batcave turns out.