Yep. We were there.

On Friday 15 March 2019, millions of students around the world participated in school strikes to speak out about climate change.

If you believed the mainstream media news services and politicians, you would probably think the kids skipped school, yelled at the clouds, and then took off for a fast-food outlet down the road.

You would be wrong. Very wrong!

The School Strike 4 Climate was motivated by one person, Greta Thunberg, but it has been moved and developed by many more. Students have now seen how they can speak up about a future they are far more invested in than those in power. It has grown to include multiple cities and towns around the world. For every negative comment thrown at them, many more kids have said “Enough!”.

What Would Kids Know

Too many politicians and news services are pointing out, ridiculing, and attempting to shame the participants of the School Strike 4 Climate for one reason: they are kids. And yet the whole reason the kids are protesting is because they want to be heard.

We have been supporting a movement for women to speak out and be heard without having to hear “oh, she’s pretty” first. And yet, we still can’t seem to shake this same attitude when it comes to kids. As I walked around the School Strike 4 Climate protest in Sydney, I noted many adults taking photos of kids holding witty signs and colourful placards. At first glance, it was heartwarming to see older generations supporting the students in their efforts.

On closer inspection, I was then disturbed by the same adults commenting on how “cute” these kids are. It was just oh-so-adorable to see children holding up a sign with a lovely little drawing of the Earth, wasn’t it? Or how about the gorgeous picture of the rainbow over their planet? Or the funny little devil-horns added to Prime Minister Morrison?

And how many of you remember the message they were trying to tell you?

The point of these protests comes from children becoming tired of the brush-off from adults. They are taught all about climate change in school; about conservation, geography, science, weather patterns. We have huge campaigns to attract more girls to STEM, or build more STEM programs for primary schools. All of this is great until the kids grow up and realise: It is all One Big Lie.

The Australian Government doesn’t know what to do with scientists. More than one in five jobs have been lost at CSIRO since 2013, the Australian government’s premier science organisation, previously responsible for amazing developments like wifi, insect repellant, gene shears, and BARLEYmax.

It’s even worse than that. Almost every scientific report handed to Parliament for review and discussion has been dismissed; extra special snubbing if it relates to climate change.

The majority of Environmental Science positions offered outside the academic field are within Mining Companies, with subsidies from the Federal Government.

This is not limited to Australia. The apathy towards science is happening all around the world.

Kids see this. They are not stupid. They see the news. They see the disassociative behaviour from adults in their communities: teachers; parents; council workers; politicians. Kids know they are NOT being taken seriously. They know they ARE being used as political pawns by politicians whenever it looks good on the television.

So, if kids are going to be dragged into the situation, why not do it on their own terms? Why not speak out with their own voices? Why not FORCE the community to hear their message by doing something drastic: By walking away from the institution that is teaching them about social responsibility and putting it into action.

The Australian school syllabus includes studying and understanding environmental science, specifically including climate change and sustainability. However, the education system places the responsibility on the shoulders of individuals. And the kids have realised this is flawed.

Instead of congratulating schools for teaching the kids critical thought and social responsibility, some political leaders are instead freaking out because the kids ARE smart enough to figure it out.

This has never been about “skipping school”. It has always been about controlling the masses and shifting responsibility. Clearly, the kids do not need further education; they already know this. 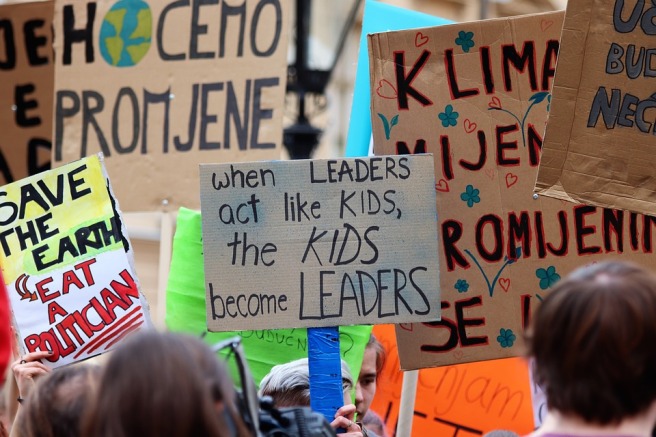 ‘Oh, he looks so angry about the environment. Isn’t it adorable?’

This is not a new tactic. Women have been the target of this same approach for eons.

Stop gaslighting the kids. Stop harassing them for missing out on One Day of school. Stop ridiculing their attempts to communicate with you and think about how you can meet them half-way. How you can RECEIVE the message.

They already know they are missing out on school.

That’s the whole reason why they walked out.