I love any game that encourages enthusiasm and imagination in our children. Hell, I love any game that encourages that in ME!! But since I am such a big kid at heart, I consider myself an easy convert. The spawnlings, on the other hand, are a tougher group to impress. And they have asked to play Dungeon Mayhem every day for two weeks straight. That’s a pretty high commendation right there.

What is it: ‘Dungeon Mayhem’

If ever there was a gateway game in to ‘Dungeons and Dragons’, this would be it. Dungeon Mayhem is a fun, action-packed card-game with all the core characteristics of your fave DnD.

There are four (4) decks, one for each of the characters: Sutha the Skullcrusher (Barbarian), Azzan the Mystic (Wizard), Lia the Radiant (Paladin), and Oriax the Clever (Rogue). Each deck has the same core elements but come with their own tricks, gear, and skills. Each turn gives you the option to attack, defend, or put in to play some special skill that is always a lot of fun.

What’s in the Box

Now. Let’s be honest: one of the sweetest joys of playing a new game is the ‘popping of the tokens’.

The first thing I love about this game is the artwork. It kind of reminds me of ‘Tavern Fame‘, in that caricature-ish nature. Each image is a play on the role of the character while capturing their unique features. Not just how the character is portrayed but in the actions and cards themselves. And it needs to be said – thank you so much for providing an even balance of male/female characters to play with, and greater diversity in characteristics beyond the usual stereotypes. Seriously. Thank You.

They all have their attacks and defence. It’s how they are portrayed that adds the DnD feel to it. For example: Lia, the Paladin, is all about justice and righteousness. Divine smite and ‘Finger Wags of Judgement’. And Fluffy.

This is the best part because it is so easy.

You can play with two, three, or four players. Each player picks a character and the corresponding deck. Set up your reference card and your hit-point tracker in front of you. Shuffle your deck, draw three cards, and set it up like this:

The reference card is brilliant: it summarises each of the actions you have with your deck, including the special skills unique to your character.

Play starts with the youngest and then taking it in turns around to the left. You start your turn with 10 hit-points and three cards in hand. Draw a card and then develop your strategy to attack the other characters! Do you defend? Do you attack? Do you play for an extra move?

And there are no limits to the extra moves. You have to play every card in your hand and yes, you can play another ‘extra move’ card as your extra move. Your turn doesn’t end until you have played a card for each lightning bolt. If you play all the cards in your hand before using up all the lightning bolts, simply draw another two cards and keep playing. Often, the lightning bolts are combined with other special moves; like Sutha’s ‘Battle Roar’, which has everybody discard their hand and draw another three cards. Plus Sutha is allowed another move. Very helpful, especially if you are ‘card counting’.

The battle ends when there is only one warrior standing! Each attack takes a hit-point from your tracker. Run out of hit-points and you’re out of the game. Now there are rare situations where you might end up in a tie. For example, I played my pickpocket card from the Oriax deck, thinking I had a good chance of stealing one of the kids’ healing cards.

I was wrong. I stole Nefarious’ Fireball card. I *had* to play it. It applied three damage to everyone. Yes, everyone. Including me. So I went down in a blaze of glory and took everyone with me.

Seriously, we really loved this game. As a family, we have a couple of suggestions:

Overall: This game is not just a favourite in the family, it is now on the official travel/packing list. It’s the type of game that is easy to crack open and play while waiting for flights or distracting one kid while waiting for another’s swimming/martial arts/lock-picking class to finish. It is quick, entertaining, strategic, and down-right fun.

Where to buy it: Good Games Australia has the game in-stock online for $19.95. You can also ask for it at any games store, or follow the links on the DnD website for purchase through Amazon or Barnes & Noble.

Full Disclaimer: I received a review copy for Australian games distributor, Let’s Play Games. I was not paid for this review but I am grateful for the entertainment during the long summer school holidays. 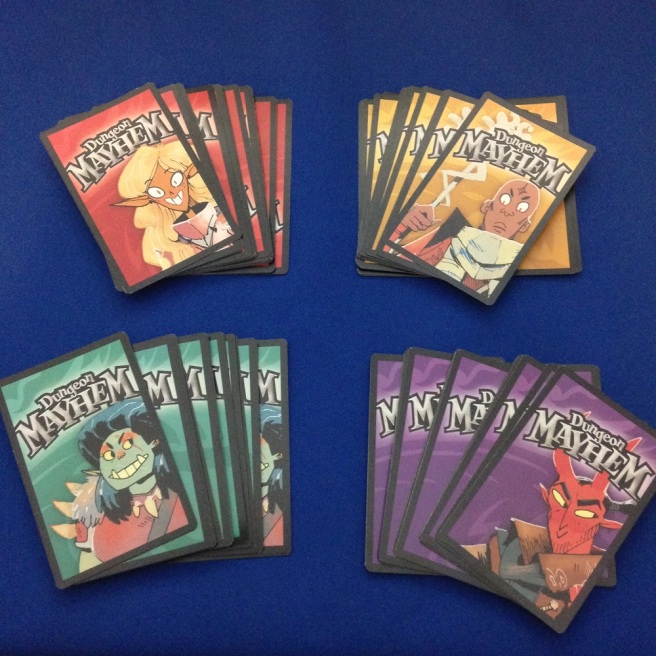